Cat As Cat Can

Chairman Of The Bored (Cairn)

Internet Legend (Riversedge and The Griffin)

Let’s See Who Shares This

The Malady Lingers On

Out of Context (Rougarou)

The Phisherman (The Umbrella Factory Magazine)

The Power Of Positive Pessimism (Westview)

The Power That Be (Rio Grande Review)

Shop ‘Til You Drop

So You Want To Be A Murderer

Stand-up And Be Counted (Sandpiper)

Tales From The Cryptic (Jabberwock Review)

We Come, We Go

Who Do You Think I Think You Are?

With A Twist (Amarillo Bay) 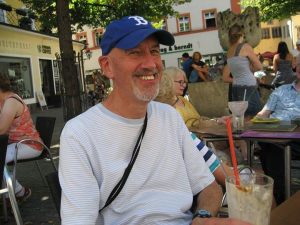 Hi, and thank you for checking out my site.

In 1962, I graduated from Brooklyn College, put the BA in theater in my back pocket, and became a folk singer. Then, I became a folk-rock singer/songwriter and, ultimately, a recording-studio singer and composer of many successful jingles, including McDonald’s, Lipton Tea, and Jeep.

Over the years, I was fortunate enough to have written songs for Diana Ross, Barry Manilow, and the Pointer Sisters, and to have sung backup for Billy Joel, Neil Diamond, Peggy Lee, Carly Simon, and others. I was also with the improvisational comedy group War Babies.

During the ’90s, the music business dried up for a lot of people, including yours truly. After a brief period of mourning, I began writing mystery novels and short stories. I’ve written three novels, Hits From The Past, Death in the Jingle Jungle, and Diehard Fan. Thirty-nine of my short stories are currently appearing in literary magazines, and I received a Pushcart Prize nomination for short fiction. Many of these stories are lined up on the left for you to click on and read.

Also, just to give you an idea of my music, I set up a page with some of the songs I wrote, sang, and recorded “back in the day,” both with my band and solo in my MIDI studio.

I hope you enjoy it all, and, if so, please come back, because I’ve got a lot of stuff, and I’ll be updating this site periodically. Thanks again!

Lenny is a versatile, “think outside the box” writer. His work can be attention-grabbing and vivid with colorful characters and fun twists, or it can be “quiet,” emotional, and deeply human. We know better than to be lured into a sense of security by his judicious and careful prose: In Lenny’s world, anything can happen.—Writer’s Relief